Situated on land donated by Auguste Chouteau in 1816, this building which was completed in 1839, was the site of the Dred and Harriet Scott trial the final outcome of which further divided the nation leading to the start of the Civil War.

Was not the first bridge to span the Mississippi River but is the oldest one still standing having been completed in 1874. The unique design and depth of the piers will likely allow it to outlive many other new bridges. 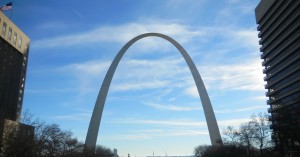 Designed by Eero Saarinen as part of a contest in 1947, and completed in 1965; a cantenary curve 630 feet tall and 630 feet across, located on the grounds of the Jefferson National Expansion Memorial and home of the Museum of Westward Expansion. 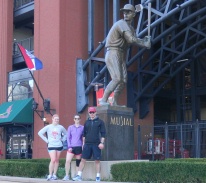 Baseball’s Perfect Warrior!  Stan ‘The Man’ Musial played for the St. Louis Cardinals from 1941 to 1963.  One of the finest players and gentlemen to ever play the game, when he concluded his playing days he had compiled a .331 batting average, 475 home runs, 3,630 hits, 1,949 runs scored, 24 All-Star games, seven batting titles, three MVP Awards, three World Series Rings and a plaque in the Baseball Hall of Fame in Cooperstown, New York.

Located on the ‘church block’ as laid out in 1764 by Pierre Laclede and Auguste Chouteau, first church building built on the site in 1770 with the current, and third, building completed in 1834.  Said to be the only piece of property in the St. Louis area which has never been sold nor changed hands.  A recently completed multi-million dollar renovation will leave you in awe.

At 2,350 miles in length is the 4th longest river in the world and served as the primary means of transportation in and out of the territory since the days of early explorers and fur traders, and still is used today as a critical part of the world’s transportation and distribution system.

Built in 1894 for a world dependent on trains and lasting into a time of dependence on air.

The Runner statue in Kiener Plaza 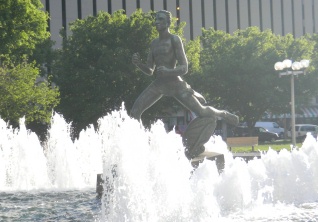 Commemorating the 1st Olympics held on American soil in 1904 and donated by an Olympian who competed in the 1904 Games held here in St. Louis.